Tony Stark was the son of billionaire weapons manufacturer Howard Stark and the owner of Stark Industries. When demonstrating his latest weapon at a military testing for the Jericho Missile, he was captured by terrorists, who demanded that he build the Jericho Missile for them that he just demonstrated to the US military. Due to the shrapnel in his chest, an electromagnet had to be placed in his chest to keep it away from his heart, which Stark later replaced with an arc reactor. In secret, Stark built a giant mechanical suit to escape from a prison cave, which he did so successfully. He then went on to revise his lifestyle, rethink his life philosophy, and adopt the identity of crime-buster Iron Man, whom he claimed was his personal mechanical bodyguard. Since then, Stark has made countless revised models of his original armor and joined superhero teams like the Avengers. More recently, Iron Man's true identity as Tony Stark has been revealed to the public.

Role in the Story

Iron Man comes together with the heroes of the Marvel Universe, such as the likes of the Fantastic Four and the X-Men, to help stop Loki and his villainous cohorts from building a weapon of mass destruction from the shattered bricks of the Silver Surfer's surfboard.

He is seen with teaming up with The Hulk in Grand Central Station, which has been taken over by Abomination and Sandman. Hulk defeats Abomination and they head to face off Sandman, however, he carries them outside, Spider-Man arrives to help defeat his old enemy. With the help of Bruce Banner, Spider-Man manages to create a water gun turret, that solidifies Sandman. After the battle, Nick Fury tells Iron Man to head back to Stark Tower to get more information about the Cosmic Bricks.

Captain America arrives shortly to join up with Iron Man to get his new armor. They head to Stark Tower, only to find Jarvis and the entire place hacked. The two manage to dodge the traps and proceed to chase after Mandarin and Aldrich Killian who are the ones to break in the tower. Luckily Iron Man manages to fix Jarvis and the systems, restoring the tower in the process and Iron Man gets his new suit as well. They catch up with Mandarin and Aldrich Killian with Loki, who steals the power core and ditches the duo. They are chased outside by Captain America and Iron Man. After being telepathically dazed by Mandarin, the duo exterminate Killian. After being beaten up for a while, the Mandarin hijacks the Hulkbuster armor. However, he is defeated by Iron Man and his remaining armors.

Iron Man and Thor then track down Doctor Doom at the submarine. Spider-Man arrives to help them. They encounter M.O.D.O.K. and defeat him, but then the submarine starts to sink. Luckily, Jean Grey arrives and saves the heroes with her telekinesis powers. They managed to catch up to Doom, but then Magneto shows up with the Statue of Liberty alive and they are thrown into the island and Doom and Magneto escapes.

Spider-Man, Iron Man and Thor then head to Asteroid M using the Stark Jet to track the villains. Magneto attempts to stop them by setting up traps, but they managed to avoid them. They catch up to Magneto where they battle him at his throne room. Magneto is defeated and the heroes head off to stop Loki and Doom. However, they take down Iron Man and Thor, leaving only Spider-Man until he is joined up by Captain America, Thing and Storm, who snuck in earlier. They are able to defeat Doctor Doom. Iron Man and Thor catch up to help stop Loki, who reveals his true plan, unleashing Galactus to destroy Earth and Asgard. With no other choices, Nick Fury calls upon the villains to help the heroes defeat Galactus, he is sucked into a portal with Loki and the villains leave the Helicarrier as part of their agreement with the heroes.

Iron Man MK 6: Iron Man's helmet is dark red and gold; designed to look like it does in the film, and to flip up and reveal Tony's double-sided face. He has a red-and-gold chestplate showing his glowing triangular blue electromagnet, a pair of red gauntlets, and metallic red-and-gold lower body protection. He has an upside-down triangle on his chestplate.

Iron Man MK 17 (Heartbreaker): Iron Man's helmet is red-and-gold and has a red-and-silver plate in the chin area, a red-and-gold chestplate with a glowing blue arc reactor within it, a white/silver harness attached to the chestplate, a pair of red gauntlets, and red, gold, and silver lower body protection. He clearly has blue eyes.

Iron Man MK 1: Iron Man's helmet is completely gray, as are his chestplate, gauntlets, and lower body protection. In his chestplate is a blue circular electromagnet.

Hulkbuster: Iron Man has a large red-and-gold helmet in the shape of the Juggernaut's, a red chestplate with a triangular arc reactor, gold plating on the red back, metallic red-and-gold shoulder-guards, golden lower torso protection, a pair of giant red gauntlets with gold plating, and red lower body protection with spiked golden shin-guards.

Heroic Age Armor: Iron Man has a more streamlined red-and-gold helmet than in other versions, a red-and-gold chestplate with a glowing circular arc reactor, red lower body protection, and a pair of red gauntlets.

Tony Stark (underwear): Tony has he- nevermind it's already in the Tony Stark line.

large thick blast makes up for it.

Hulkbuster: On top of Stark Tower, destroy eight vents within the time limit to unlock the Hulkbuster armor.

The Aftermath of Sand Central Station 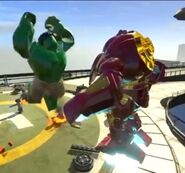 The Hulkbuster armor vs Hulk 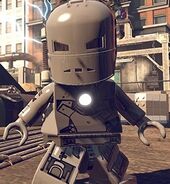 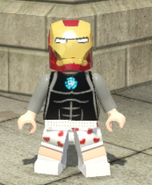